Date:
Title: Mr Big Boss Takes Seconds With the New Girl
Models: Jenna Holloway
Site: officeperils.com
Description: Jenna reports to Mr Big Boss's office and only the day after her first bit of bondage with him. He's had so much fun binding and gagging her previously that he's interested in having a bit more time with her. Placing her arms behind her back her wrists are quickly bound behind her before another rope is added on her elbows pulling them tightly together behind her. With her arms bound Jenna seats herself in the chair in front of Mr Big Boss's desk and recieves the large mouth packing he shoves into her willing mouth. A roll of silver tape is then pulled tightly around and around her headsealing her gag in. With her gag secured Mr Big Boss starts binding her high heeled ankles together before adding a rope above her knees further securing her helpless state. A few gropes before another rope is added pulling her wrists to the chair and then binding them off to her ankles. Mr Big Boss then takes Jenna's tits out of her bra and gives them some attention before heading off back behind his desk to work and take in the view. He can't stay away long and gets up giving her a few more gropes before heading off into the office to get some more work done. Jenna struggles sensually while she awaits his return. Finally Mr Big Boss comes back but only to grope her and let her know that he's about to head off for a lunch break and that he intends to leave Jenna tightly bound and gagged till he returns. Jenna struggles and moans in disappointment at being left without the attentions of the boss but she'll be right where he left her when he returns to do what he wishes. 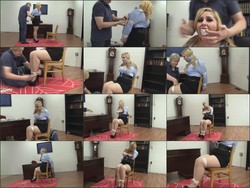 remove_red_eye2 229
It is Nothing Part 3
Related video:

more_horizBDSM
Distracting the Boss by Rubbing Her Own Pantyhosed Legs

more_horizBDSM
Debut with DiD, Tight Ropes and Microfoam Gag